I'm Not New To Old School

I have a file folder of quite a few of my old RPG characters. I was going through it when I came across two classic Traveller characters sheets. I don't always fill out the date of preparation slot on these things but I was glad I did this time.

July 25th 1995. I immediately remembered helping two friends fill out these photocopied sheets for a campaign I was starting up. I had just picked up a used copy of the black traveller hardback book. I didn't have a computer back then. And although I had heard of the Internet it wouldn't have occurred to me that you could get stuff for games from there. So I was planning on running a game with just one book. This was the era of AD&D 2nd Ed skills and powers splash books. Most games at the time seemed to moving towards multi-book systems. So why would I run a game with just one book? And an old game at that. Was I crazy?

No, I was Old School before it was cool. I had realized back then that there was nothing wrong with the original Traveller rules. And there were other advantages. It was cheap, the book cost me 5 bucks I think. It was easier to learn. And it was easier to run. I could run the whole thing with just the book some dice and paper and pencil.

So 16 years ago I was gaming old school style.

I guess you can call me an early adopter.

And now to pay the Joesky tax here is a character sheet, I can't remember where I got it from. 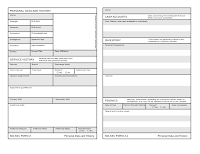 Posted by pulcherius at 5:38 PM