I Began with Dungeons and Dragons and it was Advanced, How I Started Roleplaying

My recent post about playing Traveller reminded me about how I was introduced to role playing. Is a funny story. Well to me at least.You see it started with a detention. I was in the 7th grade and not a model student. I don't remember what the detention was for. It was 1979 so more than thirty years ago. Anyhow I dutifully showed up to the assigned room to serve my time and catch the late bus home. The teacher who assinged me the detention wasn't there so I asked the teacher who was what to do. She told me ot sit and wait out my time. As I sat there bored out of my mind, I noticed 4 kids at the back of the room. They were talking, aurguing and rolling dice. Dice? Are they playing a game? The teacher seemd oblivious to them and me. So after a bit I got up and walked over to them and asked what they were doing. I went through all the newby questions. Were was the board? How do you win? And what's with those weird dice? They laughed and began to explain when one of them said "Its easier just to show him. Let him play". I sat down and rolled up my first character. A 1st ed AD&D half-elven driud. My character joined the party as they entered the dungeon. The first room was home to some giant spiders who attacked. And in the melee my charcter was bitten. Rolling my saving throw vs poison I failed. My character died and so went my very first encounter. But I was hooked. This was nothing like I had ever done before. Because they were teaching me the game they let me play on with the same character. I don't remember what happened next. And I don't know if I played with those guys again. But it was the start of something that has come to mean a lot me.
Posted by pulcherius at 2:41 PM 2 comments:

Look What I Found, Mapping Inspiration

I was looking at the Sword +1 blog about mapping with a 11"x17" bienfang pad 8x8 squares and then I remembered. I still have this; 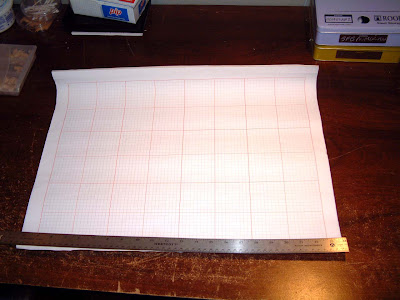 Its a left over desk blotter from years ago. I still have it because I never throw out anything that I might have a use for. It measures about 16"x22" with 1/4 inch squares overlaid with larger 10x10 squares. With 37 pages attached to the pad. Perfect for dungeon mapping. Maybe a little large to bring to the table. But certainly awesome. Now to fill it up old school style.
Posted by pulcherius at 10:28 PM No comments:

It Takes Place in the Far Future, But Somehow the 1970's

I haven't talked much about other games. I've mainly focused on D&D. My other top favorite RPG is Traveller. I was introduced to the game in high school by mutual friends. Our school decided to ban D&D during the great anti-rpg panic of the early 80's. After speaking to the school board it was determined that they were not banning role-playing just D&D. Could we play another game? Like Traveller , we asked. Does it have demons in it? They asked. No we answered truthfully. Just spaceships and aliens, like Star Wars. Fine, anything just no D&D, they declared. Rather than continuing on with some sort of protest we thanked our lucky stars and got back to role playing. Within a year or two the hysteria had died down and D&D quietly returned to our post curricular activities. Being that it was the early 80's. We didn't notice the tech inconsistencies in the game. The computers that weigh tons, the bulky comm sets or even the total lack of internet and bio-tech. The rulebooks were written in the 70's so they reflect the state of the art of that time. The technological progress that would make these items seem out dated was yet to happen so it didn't bother us at all. But now it does bother me. A bit at least. Mongoose's Traveller and T20 rulebooks are more modern. But I would like to play original Traveller. But its hard to justify the bizarreness of some of the original predictions of the tech level chart from the rulebook. According to Traveller we should be at tech level 10 or at least 9 by now. So where is the laser rifle they promised? Or jump drives, gravity control, fusion power or limb regeneration? How come we don't live in that future? What happened to it? I have a theory. When the US government canceled their ambitious space program in the 70's the scientists and technicians had to go somewhere. They went commercial. How else do could we have got cell phones, DVD players, laptop computers, the internet and GPS? Our technology is small. Little products easily sold to eager consumers. The big stuff like fusion power didn't happen because the focus was elsewhere. What does this all mean to a Traveller campaign? The setting of the game starts in our world and expands out to the far future. So our world didn't evolve into the Traveller future but it doesn't mean that another one could have. A parallel world. Setting the game in a parallel world where technology went a different direction can explain the oddities of the original rulebook. So maybe your character wears flare leg pants. A world more like Space 1999. Where the future is the 70's.
Posted by pulcherius at 5:09 PM 4 comments:

As Seen On TV

I finally saw the episode of Community where they play AD&D. Its not really the best portrayal of it on TV. They skip over most of the identifiable mechanics of the game. But they do so to push the plot along. I don't blame them for doing so. The game itself is boring as a spectator sport. I don't think we will ever see TSN broadcast the World Series of Dungeons and Dragons. And the game is being played largely by those whom have never played before. I thought it was particularly funny when Abed the DM starts to describe the different characters and how they might choose one only to have the players scramble and randomly grab sheets. That would not happen in any groups I have played with. The focus of how the game is shown is through the players choices. Die rolls serve only to provide drama or comedy, like the die roll for Pierce to successfully rub his balls on the sword. Its not the best version, that award goes to the Freaks and Geeks episode featuring Carlos the dwarf. In the Community episode it doesn't really matter that the game is D&D. That is secondary, any game could be substituted. Many have wondered about why that version of D&D was used. Maybe the writers picked AD&D for the widest possible recognition. Or it might have been a subtle homage to the afor mentioned Freaks and Geeks episode. Or possibly to avoid copyright infringement. Whatever the reason it was good to see D&D being shown without it being analyzed.
Posted by pulcherius at 8:59 PM 2 comments:

Just as I decided to drop the stat bonuses a new version of Swords & Wizardry White Box is available. And stat bonuses are now optional. Wow, neat. In the strictest sense all the rules are optional but to have it actually spelled out in print is cool. And an interesting coincidence. So it further solidifies it as my choice of rules for old school D&D style action.
Posted by pulcherius at 8:42 PM No comments: