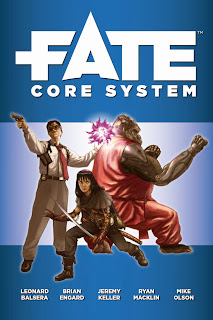 I have been tempted by FATE. I am still deciding on which of my favorite rules light generic systems to run a game with. That list has grown by one. My list now comprises of ;
1. Risis by S. John Ross
2. Story Engine by Precis Intermedia
3. Fate by Evil Hat Productions

I downloaded the two books and some other goodies. I only paid a few bucks for them (currently the game is pay what want).
I can justify this by knowing that I will buy the hard copy when its out. Fate comes in two flavours Core and Accelerated. The Core book comes in at whopping 310 pages! Kinda of much for a light RPG. This is however at the pocket book 6 by 9 inch format. And much of the book is give over to help in running the system and not the rules. The other book, Accelerated clocks in at just 50 pages in the same 6 by 9 size. More of what I expect from a system of its type.
I'm not crazy about the cartoonish style artwork in the book, it's kind of a put off. It makes me think that the system is not for serious role-playing. I haven't had a chance to read it in depth yet. But at a glance so far I like what I see. Accelerated ditches the skill system of the core rules and replaces it with something called approaches. Approaches are a set of dice modifiers based on how you approach a task rather than which skills you use. I was at first skeptical. But however I have always detested skill systems in role-playing games. Approaches can help define your character without resorting to skills or stats allowing greater flexibility in design and play. I haven't made up my mind yet. Whether or not this is the system I will use. But I do consider it to be a solid entry on the list. I might just have to go pick up some fudge dice and fire up the printer and print out a copy of the Accelerated edition.

P.S> thanks to all of you still reading this blog during the long gaps in posting.
Posted by pulcherius at 12:34 PM 1 comment: